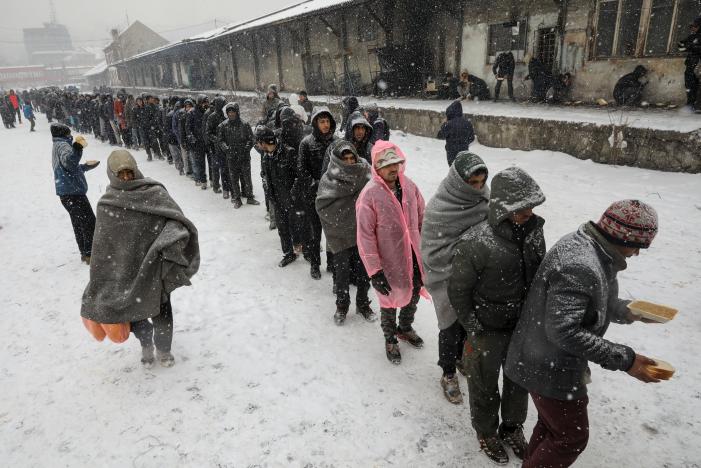 REUTERS
Dozens of Asian, Afghan and Pakistani migrants, some with children, are camping out in makeshift tents in temperatures as low as minus 20 degrees Celsius (minus 4 Fahrenheit) on Serbia’s northern border, waiting their turn to try to enter Hungary.

They are among 7,000 migrants from Asia and the Middle East stranded in Serbia. Refugee camps are packed and only women and children are likely to be let into them, leaving the men to seek shelter where they can – in abandoned warehouses in central Belgrade, or the fields just south of the border.

By one reckoning, those in the tents are the lucky ones – those who are near the front of an unofficial refugee-administered queue to submit an asylum application at one of only two recognized crossing points – Horgos and Tompa.

But in the current, brutal cold snap, they pay a high price.

Their rickety teepees, lined with blankets, are heated only with campfire embers brought inside at nightfall. Many of the children who crawl outside at first light are wearing only thin sweaters and slippers.

“People are suffering, and get a lot of respiratory infections,” said Milana Radosavljevic, a physician from Doctors Without Borders.

All this to be one of the lucky few allowed to submit a Hungarian asylum application in tiny container offices set up for the purpose at Horgos and Tompa, in the hope of then being admitted to a Transit Zone, and eventually becoming one of the 10 refugees a day allowed to enter Hungary from each post.

“It used to be 15 people every day,” said Ali Reza, a young Pakistani. “Families say there is too much waiting in Serbia, six or seven months.”

Hungary has made clear that it does not welcome migrants; Prime Minister Viktor Orban has fortified the border, an external frontier of the European Union, with a razor wire fence, and thousands of police and soldiers patrol the area with heat-sensitive cameras and helicopters.

But still the migrants come.

Around 1,500 are sheltering in abandoned warehouses in Belgrade. In one, hundreds of men, mainly Afghans, sleep on the concrete floor, relying for warmth on burning plastic garbage that gives off choking black smoke.

“It’s so, so cold – we need these fires,” said Salim Shinuari, 22, from Afghanistan. “Humanitarian workers give us food, but it’s cold inside.”

Authorities say most of Serbia’s estimated 7,000 migrants are from Afghanistan, Iraq or Syria.

Hungary registered 30,000 asylum applications last year, according to the government, of which fewer than half were accepted. In addition, nearly 20,000 gave up on the tortuous official process and tried to enter illegally.

Burhan Zadran, 30, from Afghanistan, said most of the men in Belgrade travel to the border once or twice a week to try to cross. But getting into Hungary is not enough – anyone caught within eight km (five miles) of the frontier is sent back.

“I crossed the border illegally, because the wait was too much in the Pancevo camp – five months,” said Kashif Raza, a Pakistani with scars on his face.

Syrian army, allies cut off Islamic State supply route near al-Bab: monitor
Afghan diplomat shot dead at consulate in Pakistan’s Karachi
“I was all alone without water, without food, in the countryside, for six days,” he said. “After that I had to eat something … I went to the road and surrendered to the police.”